In The Country of Men by Hisham Matar

This is an emotionally gripping tale. 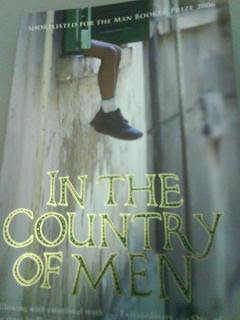 Little Suleiman narrates this story of his world; the games he plays, the people in his life, and the things he sees. I found it heartrending to read of his world of childish innocence and yet be aware of the dark political fury gathering in the background of his parents’ world.

It was even more heartrending to read on as the political fury gets out of hand – and oblivious little Suleiman stays oblivious. A few times I felt like grabbing Suleiman out of the book, sit him on my lap and tell him the things the adults are taking pains not to tell him. Keeping Suleiman unaware might cost the adults their fight, as he interprets the goings-on himself and comes to conclusions that will make you feel so helpless.

This book made me feel so much. A recommended read.

And do not ignore little kids. What they don’t know might just be worse (for all!) then what they know.
Posted by sharkgila at 11:28 PM

hmm. must check it out the next time i'm in mph.

Actually agree with the point that sometimes protecting can be just as harmful thesedays. Growing up is all about understanding pain and love as well to face the world one day. Protecting them is good but not until the point of "katak bawah tempurung". Experience is the part and puzzle of life. The mark that I fell off while learning to ride a bicycle is still there till today. Nice review and hope to read more. Cheers for the day again ... :)

Do get the book, it's a good read.

Nel: Yup, I think that telling children outright is good, then again maybe some things are best not to say. So complicated!