A Clockwork Orange by Anthony Burgess


I found A Clockwork Orange a challenging read. Firstly because of my slight allergy to the science fiction genre, and second because of the narration was peppered with nadsat speak.

Take for example this chapter from the first page of the book:

Our pockets were full of deng, so there was no real need from the point of view of crasting any more pretty polly to tolchock some old veck in an ally and viddy him swim in his blood while we counted the takings and divided by four, nor to do the ultra-violent on some shivering starry grey-haired ptitsa in a shop and go smecking off with the till’s guts. But, as they say, money isn’t everything.

The slang words are understandable taken in context, but you have to be alert to take in their meanings. Scan-reading is out of the question, so I had to read the book almost word for word.

A Clockwork Orange is about Alex, a teenage boy who seems to have the worst traits of the modern youth culture. He goes around with his ‘droogs’ smashing, spoiling, looting, raping, pillaging and oops … he did a murder too.

Whilst serving his jail sentence for the murder, Alex gets picked for a radical new program to ‘reform’ criminals. The reform program is interesting, and so is its success (or failure?). 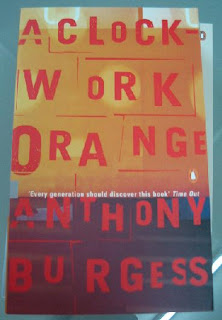 Read the book to find out.
And be alarmed. Be very alarmed.
Posted by sharkgila at 10:10 PM

You should watch the Stanley Kubrick's adaptation of the book. It is noticeably dark and disturbing. Probably more disturbing than the book itself

This might help. Some words are of russian origin - might help too if you know the russian language, heh.

yup, will try to watch the movie one day. As a rule I always try to read the book before the movie, cos otherwise I won't read it anymore!

I wish I had this when I was reading. Oh-ho, so nagoy means naked! I thought it was some body part haha. Didn't cross my mind to go look for translation, might have been to absorbed trying to read it.

has showed that accessories next season were all about a return to the age of innocence.

has showed that accessories next season were all about a return to the age of innocence.

cheap christian louboutin Heels which may have looked great on the catwalk and its leggy models,

– not to mention passe – for ordinary street wear.

atwood pumps long earring with some of his evening gowns to great effect. Gloves are back, if

only just for evenings.

As was evident in most other collections, sandals were
Brian atwood boots flat, open and strappy.