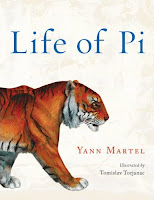 My favorite character in Yann Martell's Life of Pi is Richard Parker the tiger. I've always thought the magnificent tiger's magnificent name adds a certain added oomph to the character. A tiger named Benny might not be as cool doing the same things a Richard Parker is doing.

Does Richard Parker the shipwrecked tiger gets cannibalized too? I'm not telling you. Go read the book! (If you haven't already). It's a 6-star, multiple re-read worthy book.


[Quote Wiki] Other unfortunate Richard Parkers:
(Another Richard Parker was involved in the Spithead and Nore mutinies in 1797 and subsequently hanged, but not eaten.)
Tragic.
Posted by sharkgila at 8:51 PM

you make me wanna read it!

hey.. thanks.. always nice to meet other bookworms :)